http://universebookblog.blogspot.com/
In our culture, the  forms of social life lived by the Rumanian people along history, are clearly reflected by the way in wich dwelling-houses and worship places are located and built. Romanian villages comprising peasants households, with- mostly in Transylvania- a wooden church towering above each of them and standing high upon a hillock, constitute a most interesting rural settlement. The various occupations of the inhabitants led to the establishment of several types of villages situated amid the varied scenery of our country.
The abundance of timber available in the Carpathian regions and in the forests of the North-Danubian plains have offered splendid building material. Necessity and experience enhanced the skill and understanding of deft popular handicraftsmen who built both the dwellings with their outhouses and the churches wich, despite their characteristic features, have several traits in common with the buildings in several neighbouring countries(U.S.S.R., Poland, Czechoslovakia and Hungary). 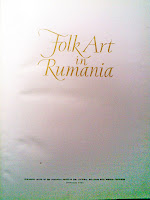 The dwellings and the wooden churches built on the territory of Rumania belong to the sphere of wood architecture, wich extends over an immense area, its main centers being in the U.S.S.R. and the Carpathians. In wood architecture, the Rumanian dwelling and church of remarkable artistic excellence proper to the Rumanian people, rank very high, owing to certain principles and techniques peculiar to them and to their original style.

On the crests of the Apuseni Mountains in Transylvania, in the deep valleys and on the hill-tops in Northern Moldavia, on the high  plateau in the west Oltenia, villages are scattered about on immense expanses of land. The houses belonging to cattle breeders and to people working in the woods are situated at long long distances one from another. Their pointed, black roofs made of straw or shingles peep out solitarily on all the heights. The household with outhouses stand right in the middle of the plot of land owned by the peasant and are often enclosed like a small wooden fortress designed to defend the cattle and the sheep against the attacks of wild beasts.

In the History of Art and Culture, Folk Art is a genuine chapter based on many worldwide traditional cultures spread on each Continent. History of Art has to be our common treasure meant to keep us close. Art doesn't argue, doesn't cheat, isn't greedy... It's just a proof that we were here.

This album was published in 1955 by The "Publishing House of Romanian Institute for Cultural Relations with Foreign Countries".